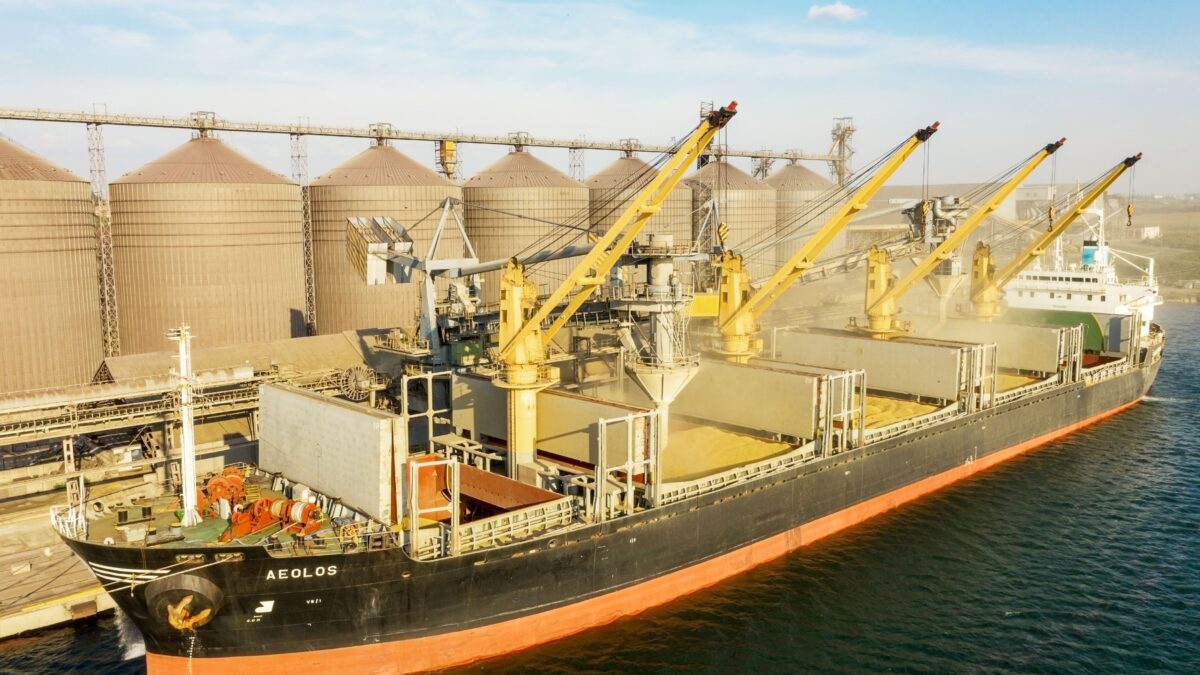 Ukraine needs to export as much as 20 million tons of grain before this year’s harvest. Due to the blockade of Black Sea ports, the only options available are rail, road and inland waterway transport. Poland and our seaports are also expected to help with exports. Massive volumes are at stake, but exporting through Polish ports will be logistically difficult.

In peacetime, Ukraine was one of the largest grain producers in the world. In 2021, a record crop of 86 million tons was harvested from fields there (data from the Center for Eastern Studies). As much as 95% of those sent for export left the country by sea. This is now impossible due to the blockade of ports by the Russian Black Sea Fleet and the shelling of Odessa.

– We are talking about Ukrainian exports of 27.2 million tons of corn and 21.2 million tons of wheat in 2021. It’s hard to imagine transporting these cargoes overland by truck. Naturally, then, we are thinking about how to transport grain by rail to Poland, Polish ports and further west in Europe – Marta Waldmann, a transport expert at the Institute of Logistics and Warehousing, tells “Namiary na Morze i Handel”.

Due to the blockade of ports in April this year, Ukraine exported only 1.1 million tons of grain, and about 300,000 in the first decade of May. In addition to grain, Ukraine’s ports and warehouses are backlogged with a host of other commodities, such as iron ore, whose exports in 2021 totaled 41.8 million tons.

– These products must now find alternative logistics solutions, from fuels to metal ores, coking coal and many others, which have been handled by Ukrainian ports – said Kamil Jedynak, vice president of OT Logistics.

When it comes to bulk cargo exports, whether grain or ore, sea transport has a huge advantage over land transport. A bulk carrier that set sail from the Romanian port of Constanta in April took 70,000 tons of grain. That’s the equivalent of 49 trains and river barges. On average, 1 freight train of 600 meters can carry about 1.9 thousand tons of grain, while a convoy of 6 river barges on the Danube can take 18 thousand tons of grain at a time. However, the route through Romania remains a thorny road due to bombing and damage to Ukrainian infrastructure leading to the border. It’s also a capacity problem at small river ports on the Danube, such as Kilia and Reni, but also congestion in Constanta itself. Exports flowing from more than a dozen Black Sea and Azov Sea ports cannot fit into a single Romanian port. The task of handling Ukrainian exports therefore falls to other European Union countries, primarily Poland.

– Poland would export more than 5 million tons of grain products annually through its ports at peak times. In Ukraine, according to various sources, between 25 and 30 million T of grain is awaiting export. This is a potential currently impossible to handle, not only by Poland, but also by other countries that could join in supporting this process – according to K. Jedynak.

There are currently 6 road border crossings and 4 rail border crossings on the Polish-Ukrainian border. The main obstacle to transporting grain in large quantities is the necessity of reloading entire trains at the border due to the different rail gauge. Contrary to appearances, the problem is not the availability of special wagons for transporting grain with European gauge, because these can be easily imported from EU countries. If necessary, coal cars can also serve as grain wagons. However, there is a lack of transshipment infrastructure and grain transfer facilities. As a result, queues of thousands of wagons form at the border. According to information from the Ministry of Agriculture and Rural Development, the 3 largest rail border crossings with Ukraine have a daily capacity of 150 wagons. This is definitely not enough.

– The difference in gauge requires a transshipment operation at the border or at terminals located inland along the LHS broad gauge line. Currently, the bottleneck is the transshipment capacity of these terminals, which have never before measured up to the need to handle such volumes. There is also a lack of sufficient storage capacity – says K. Jedynak

So there are years of neglect by both neighbors to make up without further delay. As M. Waldmann points out, border crossings with Ukraine, especially on the LHS line were yet to begin to develop intensively, thanks to the introduction of direct connections as part of the New Silk Road.

According to experts, however, it is enough to dispense with traditional grain wagons and load grain into containers. So far, they have not been used on a large scale for the export of agricultural crops, but technologies exist to allow such transportation. – Already in 2018, entire intermodal depots carrying flax grain in specialized containers were being formed in Russia. Such carriage greatly improves transshipment, offers the possibility of using universal container wagons of any wheelbase, as well as truck transport – according to M. Waldmann.

In addition to containerization, road transport could also be an opportunity, but not along the entire route from the silo to the port, but only in a limited area. Using Ukrainian trucking companies, which could deliver directly from warehouses, would partially solve the problem of railcar queues on the Ukrainian side.