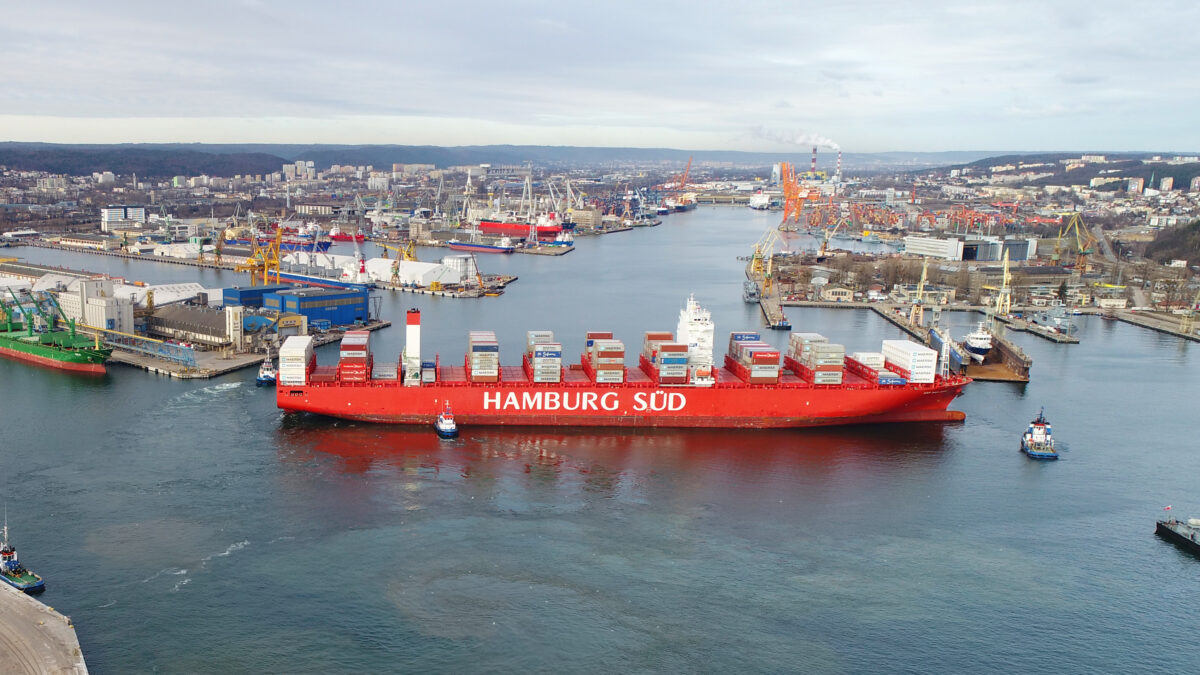 More than 62 million tons were handled by the Polish seaports in the first half of this year. This is an improvement of almost 10% over last year, and 7.5% over the second half of last year, which was the best so far since 2018. The consequences of the war in Ukraine and related sanctions and trade restrictions against Russia are noticeable in their turnover.

Nearly half of the turnover fell to the Port of Gdansk – 49%, an increase in the share compared to the same period last year by 4 p.p. However, the share of the 2 other major ports fell: the Szczecin-Świnoujście complex by 2 p.p. to 28% and that of Gdynia also by 2 p.p. to 22%. The share of the Police seaport remained unchanged at 1% of total transshipments at Poland’s largest ports.

Gdańsk handled 30.3 million tons of cargo in the first half of the year – up nearly 19% from the first half of 2021. Timber transshipments increased most dynamically – by more than 4,000%, with a total of 322,500 tons. Ore transshipments also increased – by 477%. In the entire half-year period, 366.6 thousand tons of this cargo passed through the Gdańsk quays. Increases were also recorded in coal turnover, up 46% to 3.9 million tons, and liquid fuels, up 44% to 11.5 million tons. Turnover of grain and general cargo changed little compared to last year. Grain transshipments rose by 2% to 901.9 thousand tons, while general cargo declined by less than 1% to 11.8 million tons.

In turn, the Port of Gdynia handled 13.7 million tons in the past half-year, 2% more than in the same period last year. Among cargoes, the highest volume was general cargo – 8.1 million tons, 3.7% more than in H1 2021, 2.2 million tons of grain – 17% less than in the same period last year, 1.3 million tons of coal – 68.5% more than last year, 960 thousand tons of liquid fuels – 28% less than last year, 817 tons of other bulk cargoes – 4% more than last year, and 347 thousand tons of timber – 265% more than last year.    The turnover structure also changed to a small extent. General cargo continues to be the dominant group, accounting for 59% of turnover – up 1 p.p. from a year ago. The share of grain, which is the second largest cargo group in terms of transshipment, has declined. In the past six months, the share of grain in total turnover stood at 16%, compared to 20% a year ago. In 3rd place was coal with a 9% share (5%  last year), ahead of other bulk cargoes, which had a 6% share both this year and last year, and liquid fuels, which had a 10% share last year and 7% this year. The share of total timber handling also increased, reaching 3%, an increase of 2 p.p. compared to H1 2021.

On the other hand, the ports of Szczecin and Świnoujście handled 17.5 million tons of goods in the first half of 2022 – 3% more than in the same period last year. The highest volume was general cargo – 9.1 million tons, which was down 1.5% compared to last year. Liquid fuels were next in terms of turnover, with 3.3 million tons handled – 29% more than last year. Ore, of which 1.6 million tons were handled – 68% more than a year previously – also showed strong growth and high volume. Smaller transshipments, however, were carried out in other bulk cargoes – 1.4 million tons, down 8% from a year ago. Coal transshipments shrank even more, with 1.2 million tons of coal handled at West Pomeranian ports in the past six months, 29% less than in the first half of 2021. On the other hand, there was 19% less grain handled at these ports, reaching a result of 825 thousand tons. The smallest turnover was in timber, which amounted to 117.6 thousand tons, which, however, is a result by 21.5% better than a year ago.

The smallest of the ports of primary importance to the Polish economy, Police, was the only one to record a decline in turnover. The turnover amounted to 639 thousand tons, i.e a reduction by 6%. This was mainly influenced by a decline in transshipments in the cargo group other bulk, in which this port specializes. They amounted to 572 thousand tons, which is a decrease of 5.5% compared to the first half of 2021. Transshipments of the second most important commodity in Police – the ore – also declined. Over the past six months 41,000 tons of it were handled, which is down by 11% from the previous year. However, transshipments of coal increased by 108% – from 11,000 tons in the previous year to 23,000 tons this year. The increases in the turnover of general cargo witnessed in past years have almost completely disappeared from the Police port. In the first half of last year, their volume was 21 thousand tons, and this year only 3.5 thousand tons. As a result, the structure of transshipments at the Port of Police is as follows after the first half of the year: 89% of transshipments are other bulk goods – 1 p.p. more than last year, 6% are ore – 1 p.p. less than last year, 4% are coal – 2 p.p. more than last year, and 1% are general cargo – 2 p.p. less than last year.

Overall, in the first half of this year, the primary type of cargo handled at the largest Polish seaports was general cargo (breakbulk) – more than 29 million tons, almost the same as in the same period last year. – The increase was 1 per mille. A much higher increase in turnover, by 33%, was recorded in the second largest group of cargo in terms of handling, namely liquid fuels, whose turnover amounted to 15.8 million t. A 26% increase was achieved in coal transshipments, reaching 6.3 million t. Ore transshipments also increased by 87% to nearly 2 million t and timber by 39% to 787,000 t. Drops were recorded in 2 commodity groups. By 12% in other bulk cargoes to 4.4 million tons and by 14% in grain to 3.9 million tons. The latter is quite surprising in the context of Ukrainian grain export problems and Polish farmers’ fears that it could displace their products on the domestic market.