Will the New Silk Road defend itself against the war? 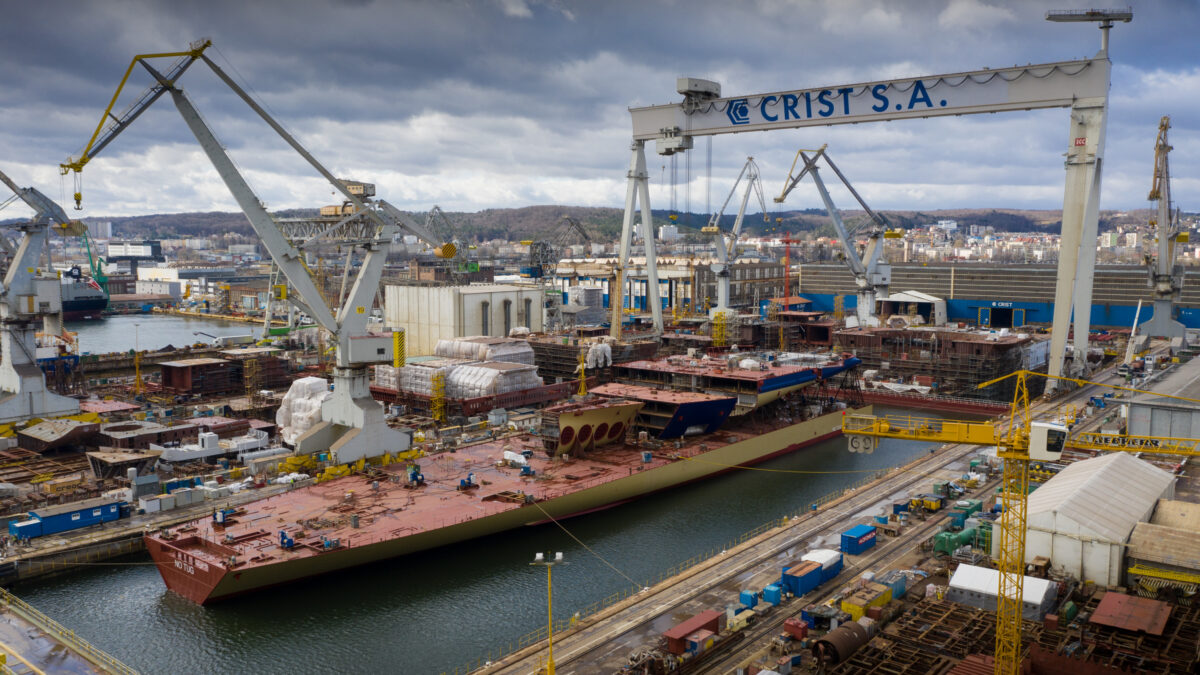 The shipbuilding and maritime technology industry in Poland has in recent years demonstrated a high degree of manufacturing flexibility due to its ability to adapt quickly to changing market realities. This proved to be extremely valuable in the economic downturn caused by the COVID-19 pandemic. After the initial shock of the freezing of many contracts, efforts were made to optimise and reduce costs and to find alternative areas of business activity.
As a result, in 2021 Polish shipyards completed the commissioning of 8 fully-equipped (civilian) ships ready for independent navigation and about 50 so-called hulls. It should be emphasised that this segment of manufacturing shows an upward trend, and the new hulls being built are very often equipped to a very high degree, which in a way can be seen as compensating for the constant number of finished vessels. ships delivered as ready-to-sail vessels. These projects are mainly for shipyards in Western and Northern Europe.

According to a report by Jerzy Czuczman, President of the Polish Maritime Technology Forum, there are three groups of players in the Polish shipbuilding market:

* Remontowa Holding (private group) – the share of this group in the total value of the shipbuilding industry revenue is approx. 20%,

* companies dependent on the State Treasury in a variety of formats – the share of this group fell from about 10% to 6%,

* the remaining companies (private or dominated by private capital) – the share of this group in the total value of revenue of the shipbuilding industry is clearly starting to fluctuate around the level of approx. 74%, which indicates an upward trend of 5%, at the expense of companies dependent on the State Treasury.

Irrespective of the ownership structure, the Polish shipbuilding industry operates in three areas: construction of new vessels carried out by shipbuilding shipyards (their market share is estimated at 18%), repair and conversion of vessels carried out by ship repair shipyards (share at 13%) as well as supply of equipment, systems, goods and services provided by contractors and subcontractors for both domestic and foreign shipyards (share at 69%).

According to PFTM data, the total revenue of the Polish shipbuilding sector is estimated at over PLN 10.6 billion. Unfortunately, the pandemic contributed to a decrease in turnover, of around 12%, against 2019. This was the result of the cancellation of some of the contracts and the extension of the delivery dates for a large proportion of the remaining contracts. The complete collapse of the cruise ship market, which is very attractive for many shipbuilding companies in Poland, has resulted in significant reductions in their revenues. However, as soon as the pandemic broke out and the cruise ship market came to a virtual standstill, Polish shipyards successfully sought orders in other specialised vessel sectors, such as the fishing vessels sector. The Scandinavian countries, recognising the huge slump in the European-manufacturer-dominated cruise ship market, have taken advantage of the resulting overcapacity in supply by using it to revamp their already severely outdated fishing fleets and investing in aquaculture. Under current market realities, such a fleet upgrade would have been too costly.

What is also satisfactory is the efficiency of shipbuilding operations as measured by the EUR/cGT ratio, which expresses the value of one compensated tonne of gross tonnage, the so-called CGT, in Euro. Whereas the CGT system introduced a measure of a shipyard’s production potential that took into account the complexity of the ships under construction. In Poland this ratio stands at 4432 euro/cGT, while the European average is only slightly higher with 4518 euro/cGT. By contrast, Asian shipyards can only report results in the range of 1388 -1834 euro/cGT.